Liv and Maddie Wiki
Register
Don't have an account?
Sign In
Advertisement
in: Cast, Females, Female Cast,
and 5 more

Rocha was born in Memphis, Tennessee and grew up in Providence, Rhode Island, graduating from Carnegie Mellon School of Drama in 1993.

Rocha is best known to comedic audiences as the Atlantic American flight attendant who had a humorous fight with Ben Stiller's character at the airport in the 2000 hit comedy Meet the Parents (a role she reprised in the sequel Meet the Fockers. She also recurred memorably on Buffy the Vampire Slayer as Anya's vengeance demon pal, Halfrek, as well as William the Bloody's love affection, Cecily. The two characters are considered the same person. Rocha played Stonewall Jackson's wife, Anna in Ron Maxwell's Gods and Generals, an epic drama about the first two years of the American Civil War. Other films include The Crucible (her big-screen debut), White Oleander, The Object of My Affection, and Ready? OK!.

In 2000, Rocha created the role of Cybil in Nicky Silver's off-Broadway comedy "The Altruists," starring alongside Eddie Cahill, Veanne Cox, and Sam Robards.[1] In the same year, Rocha co-wrote a screenplay called "Space Station 76," a parody of existentialist science fiction movies of the early-1970's intended to be shown on Comedy Central. Other writers included Jennifer Elise Cox, Sam Pancake, Jack Plotnick, and Michael Stoyanov. The script was shelved for several years then released as a straight-to-video movie in 2014. In the original script, the main female lead character was intended to be for Kali but instead went to Liv Tyler.[2]

She has appeared on the Will and Grace episode "Strangers With Candice", as a straight woman who flirted with Will. In spring 2006, Rocha played the principal in the short-lived NBC sitcom Teachers. Kali guest-starred in on the February 20, 2007, episode of Law & Order: Special Victims Unit as Cindy Marino, an aggressive TV reporter. Also, she appeared on an episode of Bones as a victim's mother. Notably, Rocha plays the character of a fourth-year resident surgeon, Dr. Sydney Heron, at Seattle Grace Hospital in the hit ABC TV series Grey's Anatomy. She was the first of the Buffyverse alums to appear in the Grey's Anatomy/Private Practice universe, including Seth Green, J. August Richards, Amy Acker, Alexis Denisof, Nicholas Brendon, and a few others.

In 2009, Rocha appeared with fellow Buffy the Vampire Slayer alum Emma Caulfield in the film TiMER.

Rocha starred in the first and only season of Sherri starring Sherri Shepherd from "The View" which was loosely based on Shepherd's life. Rocha played Summer, Sherri's boss, and eventual friend. It aired on the Lifetime Network.

Rocha as Connie, one of the friends of Billie Jean King in the 2001 made-for-TV movie "When Billie Beat Bobby".

With Stephen Lang in the 2003 mini-series "Gods and Generals".

As Beth in the 2005 mocumentary "Confessions of an Action Hero." 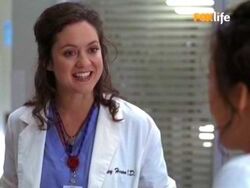 Rocha as a party planner on the "Modern Family" episode "Leap Day." Can also be seen here.